The document ‘Antigypsyism –  a reference paper’ proposes a working definition of antigypsyism, that reflects a broad but systematic understanding of the phenomenon. The paper explores characteristics and background of antigypsyism, as well as the dimensions along which it manifests itself.

Key aspects of antigypsyism, set out in the paper:

Antigypsyism is the specific racism towards Roma, Sinti, Travellers and others who are stigmatized as ‘gypsies’ in the public imagination. Although the term is finding increasing institutional recognition, there is as yet no common understanding of its nature and implications. Antigypsyism is often used in a narrow sense to indicate anti-Roma attitudes or the expression of negative stereotypes in the public sphere or hate speech. However, antigypsyism gives rise to a much wider spectrum of discriminatory expressions and practices, including many implicit or hidden manifestations. Antigypsyism is not only about what is being said, but also about what is being done and what is not being done. To recognize its full impact, a more precise understanding is crucial.

The Alliance against Antigypsyism here proposes a working definition that reflects a systematic conception of antigypsyism. This paper sketches its key characteristics, the connections between its different aspects, and its myriad manifestations, which require specific approaches. It wants to encourage policy and decision makers to put into action a coherent, but diverse, set of measures to combat antigypsyism.

A number of key aspects deserve emphasis from the outset. Firstly, it is essential to see that antigypsyism is not a ‘minority issue’. It is a phenomenon of our societies, which has its origin in how the social majority view and treat those whom they consider ‘gypsies’. To combat antigypsyism, our attention needs to shift to mainstream societies, while raising the voices of those who are dramatically affected by antigypsyism, but also usually silenced by it.

This means that, thirdly, addressing the effects of discriminatory treatment – poverty, poor quality housing, substandard education, to name a few – is necessary, but in and of itself does nothing to eradicate the ultimate source of the disadvantaged position of many Romani citizens. Consequently, antigypsyism cannot be simply treated as a thematic issue, alongside housing, education, health and employment. It needs to be dealt with as an integral part of thematic policies.

Finally, what sets antigypsyism apart is its high level of social acceptance. There is a general leniency towards antigypsyist attitudes and practices. The moral stigma attached to other forms of racism is largely absent for antigypsyism. Europe has seen the emergence of a ‘reasonable antigypsyism’ : To scold Roma and take discriminatory action towards them is all too often perceived as justifiable and legitimate. Antigypsyism is the norm rather than the exception in public discourse.

Antigypsyism is not only widespread, but also deeply entrenched in social and cultural attitudes and institutional practice. This makes the challenge of tackling it both more urgent and more difficult. Antigypsyism is like a continuous headwind. ‘Roma inclusion’ will remain illusory as long as we do not confront the headwind itself. 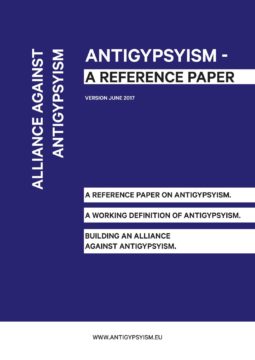