BERLIN, 6 September 2016 – Confronting increasing manifestations of racism and xenophobia against Roma and Sinti and strengthening coalition-building among political leaders to counter discrimination are the focus of an OSCE high-level event in Berlin today.

“Promoting tolerance and non-discrimination is a priority of the 2016 German OSCE Chairmanship,” said Michael Roth, German Minister of State for Europe, as he opened the event. “That is why today’s conference on anti-Gypsyism is so important. Racism, prejudice and hostility against Roma and Sinti are still deeply rooted in our societies. We need to combat this stigmatization and marginalization of the largest minority in Europe:  The place of Sinti and Roma is in the midst of our society, not on its margins.”

The speakers all stressed the need to strengthen alliances and build on the role of political leaders to firmly stand up against anti-Gypsyism.

“Despite the efforts of the last two decades, the OSCE Office for Democratic Institutions and Human Rights (ODIHR) continues to receive reports of mob violence against Roma and Sinti people, the eviction of whole communities and destruction of their property. We hear of police abuse and misconduct against individuals and whole communities, as well as continuing practices of segregation of Roma children in education,” said Michael Georg Link, Director of ODIHR. “I call on political leaders, both national and local, throughout the OSCE to lead by example and set the tone for an inclusive society.”

“A truly zero-tolerance approach to anti-Gypsyism requires much greater vigilance from the mainstream”, said Thorbjørn Jagland, Council of Europe’s Secretary General. “Over time, casual stereotypes and routine discrimination are as corrosive for Roma rights as open prejudice. And just as we must correct negative perceptions and challenge hate crimes, we also have a responsibility to tell different stories, shining a light on the huge contribution Europe’s Roma communities make to our shared way of life. This is why the Council of Europe, working with Roma artists and intellectuals and the Open Society Foundations have been championing the establishment of the first ever Institute for Roma Arts and Culture”.

The conference underlined the common voice of the international community to firmly address the continued discrimination caused by this specific form of racism against Roma and Sinti within the current challenging regional political context across Europe.

“Anti-Gypsyism has been deeply rooted for centuries in our European history. The recognition of the Roma Genocide and of anti-Gypsyism as a specific form of racism remain crucial steps for all European institutions in order to confront and ban anti-Gypsyism as much as anti-Semitism – the legacy and responsibility of our democracy and rule of law”, said Romani Rose, Chairperson of the Central Council of German Sinti and Roma.

Isabel Santos, Vice-President of the OSCE Parliamentary Assembly, said: “In addressing discrimination and racially motivated crimes against Roma and Sinti, parliamentarians have an important role to play by enacting or strengthening our laws in order to protect these vulnerable groups. But as public figures we must do more than that: we should also raise our voices in support of Roma and Sinti communities and unequivocally condemn hate crimes and all forms of discrimination against these communities.”

“It is high time that political leaders, political groups and institutions at national and European levels take a strong stand against anti-Gypsyism, as the root cause of the social exclusion of Roma,” said Soraya Post, Swedish Member of the European Parliament and Co-President of the Anti-Racism and Diversity Intergroup (ARDI). “Until this specific form of racism is systematically addressed, the success of actions in other policy areas will be limited.”

The high-level event, hosted by the OSCE Chairperson-in-Office, was co-organized with ODIHR, the Council of Europe and the Central Council of German Sinti and Roma, and brought together more than 130 participants, including members of the OSCE Parliamentary Assembly, the Parliamentary Assembly of the Council of Europe, the European Parliament and of national parliaments, along with high-ranking governmental representatives, civil society representatives, and other relevant stakeholders in the fight against anti-Gypsyism. 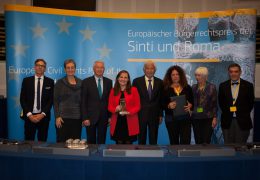 Acting at the national and international level, the Central Council seeks to achieve the following goals: to continuously raise awareness of the Holocaust of Sinti and Roma; to see Antigypsyism acknowledged as a specific form of racism and condemned in all of Europe, given Europe’s responsibility to history. And in doing so, to safeguard the rights of minorities, to assure anti-discrimination protection, and to ensure the participation of the minority. ... mehr