Only a few weeks in office, the new Italian government coalition of far-right Northern League and the eurosceptic Five Star Movement is shaping the racist narrative against Roma in Italy by promoting antigypsyist actions and continuing to engage in hate speech. As European Roma and pro-Roma civil society we strongly condemn the unconstitutional proposal of Interior Minister Matteo Salvini to establish a census for Roma in Italy and ask the Italian government to uphold the rule of law and democratic values.

It is now time for the European institutions, civil society organisations and all citizens believing in democracy and human rights to speak up, recognize the nature and the cause of hate speech directed towards Roma and push for the enforcement of the existing legal mechanisms of the European Union.

Even though the proposal for a census of Roma and for expulsion all non-Italian Roma is clearly against the law and has already been retracted by his government, Salvini counts on the support of a large percentage of the population and successfully uses antigypsyism to increase his voter base. Sadly, hate speech by Italian politicians is on the rise and is not a new phenomenon, especially among members of the Northern League.

The mayor of Treviso in 2015 said that it is best “to dress Roma up as rabbits so the hunters will shoot at them”. In 2017, Mara Bizzotto declared on 8th of April, the International Roma Day, that “we should rather commemorate the victims of Roma’s felonies” [instead of Roma victims of genocide]. Just a few days ago, Italian League member MEP Danilo Oscar Lancini argued against future Roma related EU policies and funding in the European Parliament since “Roma do not want to be integrated”.

80 years ago Europe has experienced a similar narrative and we all know the consequences.  This is why we ask the European institutions and the broader public to act responsibly and not only stand by and watch. Everybody should condemn this racist act. The European institutions must make use of the available mechanisms and start penalizing hate-speech against all groups. The European Commission needs to launch an infringement procedure against this Italian government concerning Roma people’s housing situation, which we have been calling for several years. There is no justification for Salvini’s antigypsyist acts and statements.

It is a high time to join our forces and fight antigypsyism because the future of our society is at stake. Europe must start defending its core values and stand up for our right to live in a racism-free society. 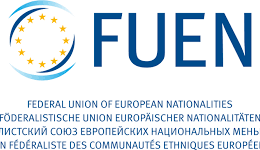 The 63rd congress of the Federal Union of European Nationalities (FUEN), the civil society umbrella of national minority organizations, adopted a resolution on June 23, 2018, which condemns the racist ... mehr