It is our pleasure to invite you to the virtual conference that will aim to discuss the  “role of the European Union and of individual Member States to fight antigypsyism in the Western Balkans and to ensure inclusion of Roma. The conference will take place on 25 March 2021 from 12.00 to 13.45 AM via Webex platform. 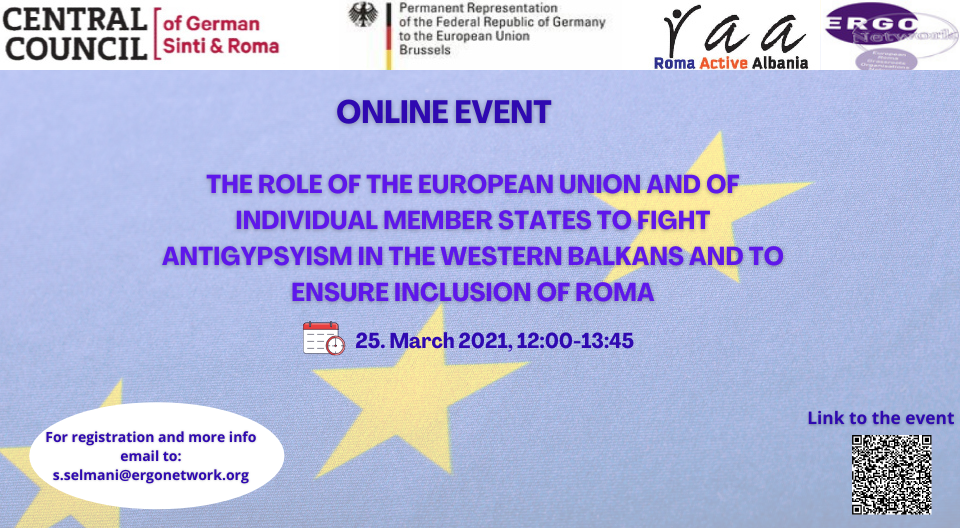 You can find the preliminary agenda below.

The virtual conference discusses the need to fight antigypsyism in the Western Balkans – the specific form of racism towards Sinti and Roma – and the need to include the position and situation of Roma in all relevant policies of the European Union with regard to the countries in the accession process.

The European Commission adopted in October 2020 the new “EU Roma Strategic Framework for Equality, Inclusion and Participation” which is equally relevant for the countries in the Western Balkans. A key priority of the new framework is to recognize and to fight antigypsyism as the root cause of exclusion in the fields of education, employment, housing and basic services, health and poverty.

Also in October 2020, the European Commission adopted the “Economic and Investment Plan for the Western Balkans”, as part of the 2020 Enlargement Package which emphasises that “the integration of Roma people into society by supporting their full participation in education and in the labour market is of particular importance and will be a key priority of the EU integration process”

The countries in the Western Balkans are currently in the process of developing new strategies and action plans for the inclusion of Roma and should already make use of these new policies of the European Union. A clear commitment of the governments of the countries in the Western Balkans and a good understanding of the need and the relevance to fight antigypsyism as well as stronger empowerment of Roma in all fields would be indispensable.

Against this background, the Central Council of the German Sinti and Roma, ERGO Network, Roma Active Albania and the Permanent Representation of Germany to the European Union invite representations of the EU Member States to the European Union and further important stakeholders to an online conference on 25. March 2021 to discuss requests and proposals of the Romani civil society.

We would be grateful if you could confirm your participation by 24 March 2021 with: s.selmani@ergonetwork.org

H.E. Ambassador Mr. Thomas Ossowski, Representative to the Political and Security Committee, Permanent Representation of Germany to the European Union

“Cooperation of Romani civil society with international actors and the government “

“The GIZ InR Project in Serbia as a promising practice”

“Romani women – Power of change in the Western Balkans and Turkey”

“Romani entrepreneurs as a driving force”

“Inclusion of Roma in assistance programmes to fight COVID 19 pandemic”

The event is conducted in English language