In the latest talk on 25 November 2020, to which the Building Senator of the city of Berlin, Regine Günther, invited representatives of the German Bundestag, the Berlin Senate, the Deutsche Bahn (German Railway Company) and the Central Council of German Sinti and Roma, the Deutsche Bahn presented a newly calculated 12h variant for the route of the planned S 21.

“The protection and preservation of the monument to the Sinti and Roma of Europe murdered under National Socialism has always been a top priority for the Central Council of German Sinti and Roma. This place is a place of remembrance for the members of our minority, but it is also a place where the Federal Republic of Germany expresses its responsibility for the genocide committed by the Nazis, for the Holocaust against the Sinti and Roma. That is why the new version, which leaves the monument largely untouched, is a good basis for further talks,” Romani Rose said in a first summary.

The Central Council expressly thanks the many people and institutions who have publicly and vis-à-vis politics and the railways committed themselves to the protection of the monument.

“This shows us that the monument is perceived as an important part of our common German history. We are an integral part of our society. We must therefore also assume responsibility in our society. Berlin needs the S21 and I am very pleased that Deutsche Bahn has shown a perspective with the 12h version now presented, which equally combines maximum protection of the monument with a feasible route”, Rose continued.

The new variant envisages that the same technology that was previously used to undercross the Spree between the main station and the Reichstag will be used to tunnel under the site of the Memorial to the Sinti and Roma of Europe murdered under National Socialism. The earth will be frozen and the tunnel itself will be driven without shield tunnelling using traditional mining techniques. The surface of the monument site is thus completely protected. There will only be an open excavation pit in front and behind the monument site. Only the supply tunnel, which leads under the Black Basin, will have to be partially rebuilt. This construction work would only take about four months. Thus, the Central Council’s demand that the monument may not be moved and must be protected to the maximum extent possible at the existing site is met as far as possible.

For the railway, the route between the main station and the Brandenburg Gate represents a considerable challenge, because – in accordance with the technical and political specifications – a total of twelve “compulsory points” must be taken into account: in addition to the Reichstag building and the Jewish Memorial as compulsory point IX, the Memorial to the Sinti and Roma of Europe murdered during National Socialism. The Central Council of German Sinti and Roma will continue to accompany the detailed planning of the planned route and ensure the protection of the monument. 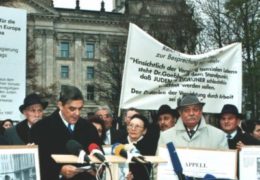 “The protection and preservation of the monument to the Sinti and Roma of Europe murdered under National Socialism is our top priority. Here we have brought together our ties from ... mehr 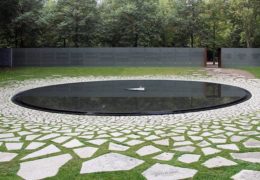 On June 26, 2020, at the invitation of Berlin Senator Regine Günther (Environment, Transport and Climate Protection), a second discussion was held with all participants on the Memorial to the ... mehr