On June 26, 2020, at the invitation of Berlin Senator Regine Günther (Environment, Transport and Climate Protection), a second discussion was held with all participants on the Memorial to the Sinti and Roma Victims of National Socialism and the route of the planned railway route for the S21. During this meeting, the Deutsche Bahn again explained the complex conditions for the route of the S21 and also presented a new variant 13, which provides for both tunnel tubes to run east of the Reichstag building. The construction commission of the German Bundestag will now deal with this variant.

The variant 13 presented by Deutsche Bahn for a route east of the Reichstag building is of course fully supported by the Central Council of German Sinti and Roma, as the monument would not be affected. At an initial discussion, this variant was ruled out as not feasible on the basis of the specifications of the German Bundestag. The Central Council had therefore offered an alternative solution, which could still be discussed if the variant 13 presented here could not be realized.

The Central Council of German Sinti and Roma has stated on several occasions that the monument does not only include the Black Water Basin, but the entire complex. If a large part of it becomes a construction site, a commemoration on site is not possible. It is the concern of the Central Council and all institutions involved must first of all deal with the commemoration of our victims in a dignified manner, for which this monument is the central symbol.

The relevant construction phase for the S21 will start in 2026 at the earliest. The Central Council of German Sinti and Roma will contribute to an amicable solution that takes into account the interests of the minority as well as the interests of Berlin’s citizens, for whom the S21 will be an important part of their transport network. 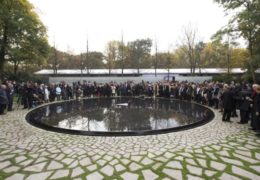 In the latest talk on 25 November 2020, to which the Building Senator of the city of Berlin, Regine Günther, invited representatives of the German Bundestag, the Berlin Senate, the ... mehr