Native-language counselling and support for Roma refugees from Ukraine is offered by the joint emergency hotline of the Heidelberg based Documentation and Cultural Centre of German Sinti and Roma and the Central Welfare Office of Jews in Germany, based in Frankfurt.

Hundreds of thousands of people have already fled the Russian bombs and tanks from Ukraine – including many Ukrainian Roma. Since men between the ages of 18 and 60 are no longer allowed to leave the country, it is mainly women, children and elderly people. Especially for them, special protection requirements must be met in this exceptional situation. In view of the deeply rooted antigypsyism in European societies, this applies even more strongly to members of the minority.

An emergency hotline is therefore to be the first mother-tongue contact and counselling point in Germany, especially for Roma from Ukraine. The service will start at the beginning of July and is supported by the Documentation and Cultural Centre of German Sinti and Roma in Heidelberg in cooperation with the Central Welfare Office of Jews in Germany (ZWST) based in Frankfurt and financed by “Aktion Deutschland Hilft” (Germany’s Relief Coalition).

“Numerous reports prove that Ukrainian Roma are partly not regarded by the support structures as equal Ukrainians affected by the war. Their entitlement to support and their neediness are denied and they are stigmatised as beneficiaries of the current situation,” sums up Romani Rose, Chair of the Documentation Centre. And he adds: “We would therefore like to offer the members of the minority a trustworthy contact point. There they can also talk about possible experiences of discrimination in a protected setting.”

The Central Welfare Office of Jews in Germany, in turn, sees its main concern in the duty to help in the sense of compensatory social justice. “From our many years of work, we know that vulnerable groups are particularly affected by crises. Almost half of the Jewish community in Germany has a biographical connection to Ukraine, which is another reason why the war is so close to them. That is why we now also want to support partner organisations whose target groups are not seen in the consequences of this war,” emphasises Aron Schuster, Director of the ZWST.

The emergency hotline sees its main task in supporting Roma who are already in Germany as well as members of the minority who want to flee to Germany. They are to be advised on legal as well as health and social issues. In addition, the staff would like to refer all those seeking help to the local voluntary and professional support structures. 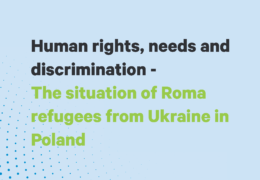 The war in Ukraine has triggered a refugee crisis unprecedented in Europe since the Second World War. The report highlights the most pressing problems faced by the Roma from Ukraine in Poland, with particular emphasis on systemic antigypsyism and the resulting discriminatory practices. ... mehr 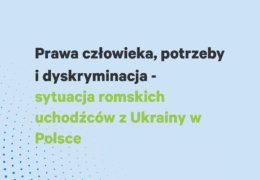